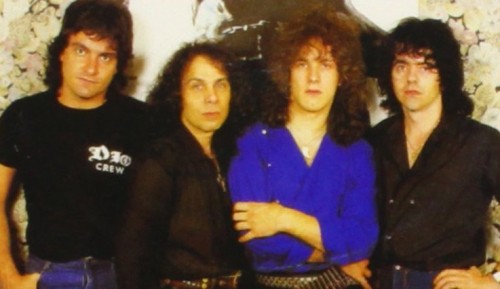 Today we take a trip back to 1983 to the debut album by the band named after one of the most influential singers in metal, Dio and the album, Holy Diver.

Dio formed after Ronnie James Dio and legendary drummer Vinny Appice left Black Sabbath to form a new band. Ronnie, who was a fan of Sir Walter Scott and science fiction wrote songs that were fantasy tales. In particular, the songs “Rainbow in the Dark” and “Holy Diver” showcase the theme of good vs. evil to raise questions about the deceit in romance and religion.

While the cover art, which features Dio’s band mascot Murray, was deemed to be controversial by critics suggesting that it appears to be a devil killing a cleric, Ronnie clarified that it could be a priest killing a devil and that you shouldn’t judge a book by it’s cover. Dio’s logo had also been interpreted as spelling the word “die” or “evil” when turned upside down. Dio also said this was coincidental. The artwork for the cover was done by artist Randy Berrett.

The album reached #56 on the 1983 Billboard 200 chart and the track “Holy Diver” reached #40 on the Mainstream Rocks USA chart while “Rainbow in the Dark” charted at #14. The lineup for Holy Diver includes: Ronnie James Dio – vocals, Vivian Campbell – guitar, Jimmy Bain – bass and Vinny Appice – drums.

Ronnie’s death in 2010 has left a void in the metal world, however his voice lives on forever through his music. Vivian Campbell, who parted ways with Dio in 1986, went on to join a number of different bands including Whitesnake, before settling in Def Leppard in 1992.  Vinny Appice has been involved in many different musical endeavors over the years and was inducted into the Hall of Heavy Metal History in 2017. Jimmy Bain sadly passed away in 2016 from lung cancer