Happy Wednesday Metalheads! This month it’s all about Power Metal and today we take a trip back to 1995 to the fifth album by German power metallers, Blind Guardian called “Imaginations From The Other Side.” 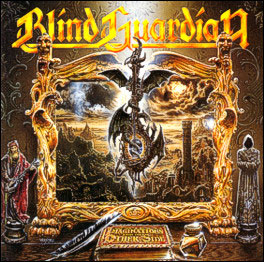 The album which is darker in comparison to their previous albums, is the first album that drew me to the band. I heard the song “Bright Eyes” and was hooked from there. This is also the first album that Kai Hansen did not make a guest appearance on and also the last album vocalist Hansi Kursch played bass on. The album contains references to many great movies including: The Wizard of Oz, The Lord of the Rings and Peter Pan to name a few and spawned two singles: “A Past and Future Secret” and “Bright Eyes.”  Definitely a great album to add to your collection.

Check out the video for “Bright Eyes” below