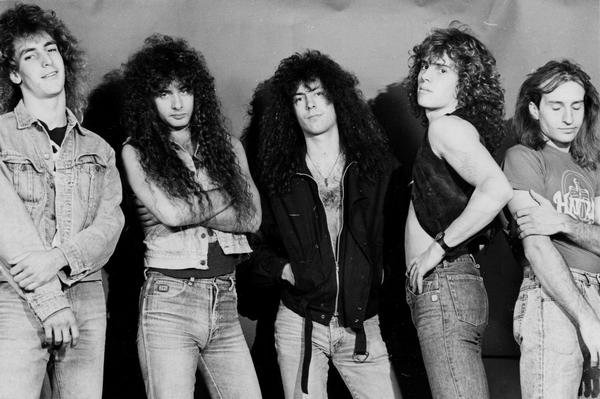 Happy Friday Metalheads. Hope you all had a great week. For today’s rewind I’m going back to New Jersey to a band that is one of my all time favorite bands called Hades. Formed in 1978 by guitarist Dan Lorenzo, Hades began playing the circuit and released their 7″ EP “Deliver Us From Evil” in 1982. After a few lineup changes, the band handed out some demos and rehearsal tapes throughout the underground scene and interviewed with some local fanzines in the NY/NJ area to get their name out.

Hades was then soon heard on the Megaforce compilation “Born To Metalize” and Metal Blade’s “Metal Massacre VI.” This led to Torrid Records signing the band and the label released their first full-length album “Resisting Success” in 1987. The album recorded in New Jersey showcases Hades talent, great vocals, blistering guitars and songs that keep you hooked in from the first track “The Leaders?” all the way to the 3 part “Masque of the Red Death.” In 1988, they released their second full length album “If At First You Don’t Succeed” which led to opening slots on tours with Slayer, Anthrax, Overkill, Megadeth and Testament to name a few as well as shows at different venues including the now defunct L’amour Brooklyn and The Chance in Poughkeepsie, NY.

Hades left for their first European tour in 1989, but unfortunately it was to be their last. Tensions between the band members caused the band to break up and members Dan Lorenzo and Alan Tecchio formed Non Fiction while drummer Tom Coombs ended up joining Doro Pesch’s band. Jimmy Schulman went on to lend his services to a few bands and Ed Fuhrman became involved with martial arts but eventually decided to return to music.

In 1991, Hades released “Live On Location” which was taped at the now defunct Studio One in New Jersey for their first reunion show. The band went on to release “Exist to Resist” in 1996 which contained a mix of old and new songs. Metal Blade quickly signed Hades and consequently released “$avior Self” in 1998. This led to a performance at Wacken Open Air in 2000 where they were joined by Jimmy Schulman on bass and Ron Lipinicki on drums. However after the release of “Damnation” in 2001, Hades once again broke up and the members went on to various musical projects.

In 2004, Mausoleum Records re-released the first two Hades albums and Cruz Del Sur released the DVD “Bootlegged in Boston 1988” in 2009. Several reunion shows have since taken place in their native New Jersey, and a second DVD “Hades: Re-United and Re-Ignited” of their reunion show at Dingbatz in Clifton, New Jersey was released in 2010.

The first time I heard Hades was about 10 years ago when a friend of mine was playing “Live On Location” and from the minute I heard The Leaders? I was blown away. Check out the video below from a show from 2001 in Erie, PA. A classic indeed.