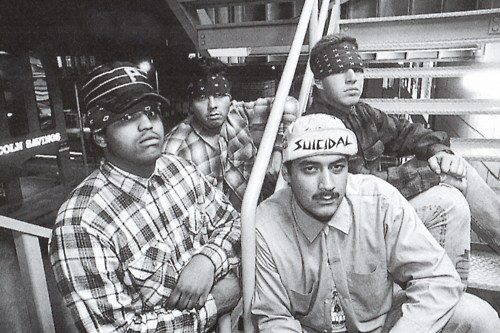 Happy Friday Metalheads! Hope you had a great week! Today we’re stepping back in time to 1983 to the self-titled debut album by Suicidal Tendencies for the track “Institutionalized.”

This was the only single to be released off this album, but it is one of their most popular songs and is always on the setlist for their shows. The video depicts Mike being misunderstood by his parents and friends and while his parents decide to take matters into their own hands to get him help, he assures us that he’s okay and he’ll figure it out, he just wants a Pepsi.

Mike’s parents are portrayed by actors Jack Nance known for his roles in many of David Lynch’s movies including Eraserhead, Dune and Blue Velvet to name a few and Mary Woronov, a renowned actress, author and painter, who has appeared in several movies and television shows and worked with the late Andy Warhol.

Suicial Tendencies started out as a punk band but crossed over to thrash metal in the mid 80’s. The song “Institutionalized” has been used in several movies and video games and has been covered by several bands including Ice T’s Body Count on their 2014 album “Manslaughter” billed as “Institutionalized 2014.” Check out the original video below and  if you look at the video closely, you’ll see a guest appearance by a member of Slayer.  Let me know in comments below who you see.