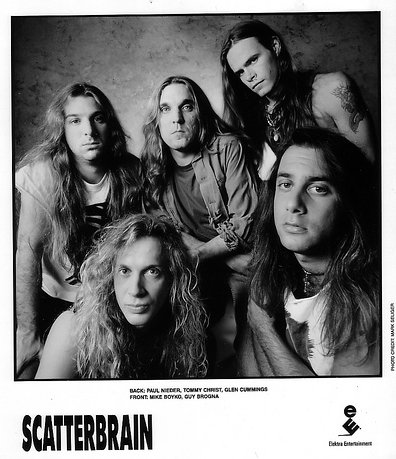 Happy Wednesday Metalheads. Today this track called my name, so let’s take a trip back to 1990 to a track off the debut album called “Here Comes Trouble” by Scatterbrain for the track “Don’t Call Me Dude”.

The video for “Don’t Call Me Dude” received substantial airplay on MTV’s Headbanger’s Ball and was a Top 20 pop single in Australia.  The song was also featured on an episode of MTV’s Beavis and Butthead titled “Blood Drive.”

The band broke up in 1994, but played a reunion show at B.B. Kings in New York City in 2007, without original guitarist, Glen Cummings. Singer Tommy Christ and guitarist Glen Cummings eventually went back to Ludichrist and have been playing together since 2012.

CHECK OUT THE VIDEO BELOW FOR “DON’T CALL ME DUDE”